Those who step into leadership of an interorganizational network or partnership assume a high task. Whether serving on a network’s council or steering committee or its leadership team, whatever the terminology, these leaders are called to help God’s people work together successfully!

Few callings are as valuable as this service to help the global Church do ministry as one body, fulfilling Jesus’ prayer of John 17, “Father, I pray that they may be one, as you and I are one.”

Networks and partnerships continually rely on their leaders to help set up a collaborative environment (or, as it has been aptly put by others, “creating a culture of exchange”). These leaders, however, often underestimate the distinct differences between being a leader in an organization and being a network’s leader.

The nature of the latter leadership role calls for leaders to set aside their own personal and organizational desires to a significant degree, for the sake of the network.

Simply stated, those serving in such roles must choose between viewing themselves as an “owner” of the network—which is an inappropriate stance to take—or to see their role as a “steward” of the network. The chart below identifies some of the crucial differences in approach between these two stances. 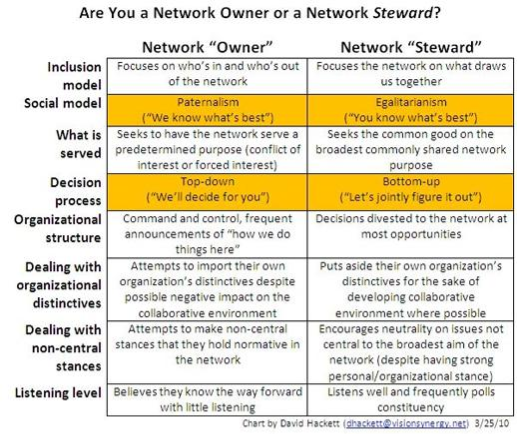 What has been your experience of observing those who try to own a network? Or how has it felt to be blessed by those who caringly steward a network or partnership?

Rev. Dave Hackett is Senior Advisor at visionSynergy where much of his work involves collaborative global mission in the areas of digital and Muslim ministry. Living in Saudi Arabia as a child embedded Dave’s love for the world and the Middle East. He taught at Han Nam University in South Korea as a Presbyterian missionary and studied at Fuller Theological Seminary (MDiv) and Oxford University. Ordained as a Presbyterian minister since 1985, Dave was a mission pastor for eight years before serving as associate and executive director of Presbyterian Frontier Fellowship for 12 years, coordinating unreached people group mission. Dave was on the founding board of visionSynergy in 2003, and joined the staff in 2005.